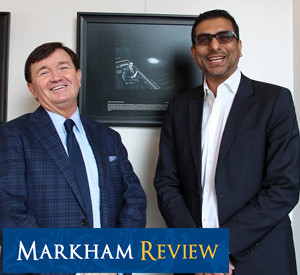 Markham Review • May 15, 2017 – Many people give back to the community, but not everyone gets recognized for their efforts.

Karen Merk founder of Portraits of Giving is making sure that changes. As a way to acknowledge local people who make a positive difference in their community, she has committed to immortalizing key contributors in the community with formal portraits that will be exhibited across the area at special events that will, in turn, raise money for York Region hospitals.

This is the eighth year Merk will identify 12 deserving individuals for the honour.

One of the first on the list to receive the portrait treatment this year was Shakir Rehmatullah of Flato Developments, a local builder of homes and communities. He was recently given recognition for his support of the arts in Markham being named the Flato Markham Theatre’s first honorary patron by the theatre that bears his company’s name.

An agreement to extend the naming rights of the theatre to Flato was recently signed for an extra ten years, bringing in a hefty $2.3 million to support the theatre.

Another local recipient is Stouffville’s John Bouwmeister of Bouwmeister Landscaping, who is also being celebrated for his work in the community. The tour of local community builders has been at Flato Theatre for the month of May, but will also be on display at Stouffville’s 19 on the Park from October 30 until November 24.