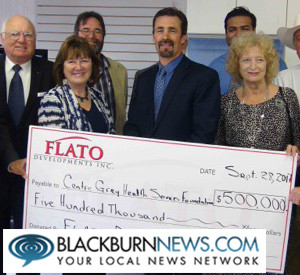 Flato Developments of Markham has promised the hospital a half million dollars over ten years.

The company is currently in the first stage of developing an 800 home subdivision in nearby Dundalk.

Flato President Shakir Rehmatullah realizes Dundalk residents depend on the Markdale hospital. He says they want to be a vital part of the community.

He adds they have no plans at the moment for development in or near Markdale but it could come down the road.

Centre Grey Hospital Board Chair Fay Harrision says the money will be used to ensure excellent, local health care is available for families in the current Markdale hospital location as well as the new hospital. Construction on that is expected to begin in 2019.