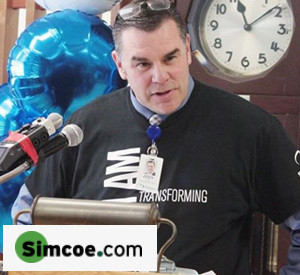 Stevenson Memorial Hospital in Alliston has officially embarked on its most ambitious capital fundraising campaign.

A crowd of supporters gathered inside the hospital’s cafeteria April 19 to witness the kickoff of the Transforming Stevenson campaign, which seeks to raise $8 million for the hospital’s redevelopment project.

“Each year the challenge to our community becomes greater and greater to support the needs of the hospital. Never truer is that right now,” said Marg Barber, president of the hospital foundation.

Levac noted that when the hospital was constructed in 1964, it was servicing a community of 10,000 and was built with an emergency room designed to handle 7,000 visits per year.

Today, the hospital’s catchment area has grown to 73,000 people and the emergency room sees more than 35,000 visits per year.

“To accommodate our community’s growing health care needs, its time for our hospital to take the very first step in redeveloping the facility in our community,” he said.

Levac said the redevelopment project has now proceeded to the second stage of the six-stage planning and approval process.

It’s at this stage where the province typically makes a funding commitment.

The total project cost has been set at $136.2 million. This includes $30 million that will have to be generated locally through fundraising efforts.

The hospital wants to begin construction of the new 161,000-square-foot facility by the fall of 2018, but the start date could be pushed back depending on the timing of approvals from the Ministry of Health and Long-term Care.

The campaign is already off to a strong start thanks to three generous donations, including $1 million from the Nottawasaga Foundation and $50,000 each from Rory MacKinnon, operator of the McDonalds restaurants in Alliston, and FLATO Developments Inc.

The event concluded with the unveiling of the campaign’s new billboard, which will be displayed along Highway 89 between Cookstown and Alliston.